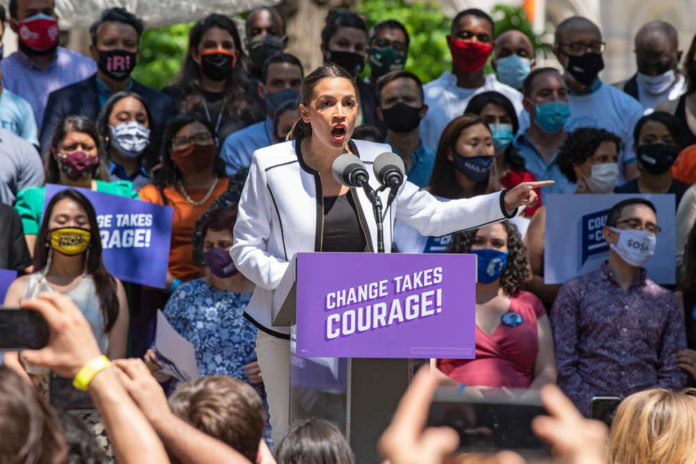 In her tweet, Mystal somehow related the recent attack on House Speaker Nancy Pelosi’s (D-CA) husband to the acquisition of Twitter by Elon Musk.

“This is why they are so excited about the new overlord of Twitter,” she continued. “This, the violence, has always been their endgame.”

“And if they win they will only get worse,” she concluded.

This is the future the Republicans want. It’s the future they’ve literally been calling for on television. This is why they are so excited about the new overlord of Twitter. This, the violence, has always been their endgame.

And if they win they will only get worse. https://t.co/qRvxQLCnwt

Ocasio-Cortez’s other social media activity shows that she is openly pushing this unfounded rhetoric.

In one recent tweet, Ocasio-Cortez took aim at GOP Rep. Michael McCaul (TX) after his comments on Fox News blaming Democrats’ weak stance on crime for creating “the environment where this happens.”

“Or maybe a billionaire-fueled propaganda channel that regularly generates high volumes of death threats to elected officials while pumping propaganda for an extreme right-wing that openly embraces fascism is what’s creating ‘the environment where it happened,'” Ocasio-Cortez tweeted in response.

California state Sen. Scott Wiener (D) concurred with Ocasio-Cortez in a recent statement, claiming the assault on Pelosi’s husband was “the direct result of toxic right wing rhetoric and incitement against Speaker Pelosi and so many other progressive leaders.”

Pelosi’s husband, Paul, reportedly encountered a man who had broken into his San Francisco home, and the man asked, “Where’s Nancy? Where’s Nancy?”

There was a struggle over a hammer, and the suspect allegedly bashed Pelosi’s husband with the tool.

He was rushed to the hospital where he had “successful surgery to repair a skull fracture and serious injuries to his right arm and hands.”

Nancy Pelosi was not in San Francisco when the attack took place.

​​“The Speaker and her family are thankful for the outpouring of support and prayers from friends, constituents and people around the country,” Pelosi’s representative wrote in a press release. “The Pelosi family is immensely grateful to Mr. Pelosi’s entire medical team and the law enforcement officers who responded to the assault.”