That didn’t stop Democrats from partying as if they’d just freed Europe, but it’s getting ahead of everyone. Last week, Nancy Pelosi pushed the “Build Back Better” measure through the House, but it is effectively dead in the Senate, with no single Republican support. The House of Representatives recently enacted a major spending plan containing a considerable tax reduction for the rich, primarily benefiting California, New York, and New Jersey citizens.

According to the reports, Democrats running for Senate in tough districts are being pushed to focus on the cost of living as a way to sell President Biden’s plan. The message was one of the top-performing communications among the approximately 360 messages tested by Senate Democrats so far this season, according to a polling brief for the Democratic Senatorial Campaign Committee.

“The current high cost of living is due to Democrat policies, which are essentially the result of pouring too much government cash into an already overheated economy.” So, now that that fact is staring ordinary Americans in the face every day, Democrats will pretend they are the ones who can bring it down? And they’ll achieve it by spending even more money? Former House Speaker John Boehner said, “I can’t think of a worse, more clearly absurd message.”

The more money pumped into the system, the more they devalue ordinary Americans’ purchasing power and steal their savings. Any benefits are wiped away by rising inflation, which is like a dog pursuing a car. Democrats will be damaged by an emphasis on the expense of living because you can lie to people about many things, but you can’t lie to them about what they see on their bank statements. 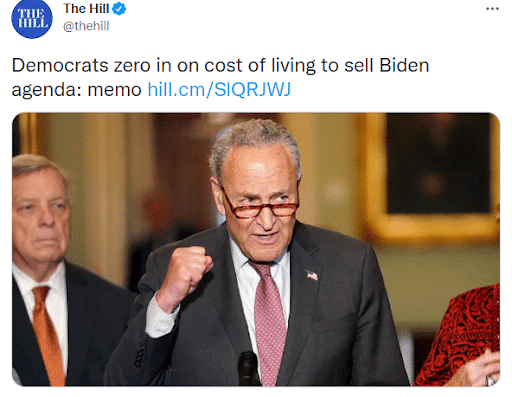