After Rep. Cori Bush (D-MO) tweeted an “empowering selfie” following her so-called arrest at a Supreme Court protest, Twitter users roasted the congresswoman for her attention-seeking and privilege.

Bush, a member of the radical far-left “Squad” — along with fellow “Squad” members Reps. Alexandria Ocasio-Cortez (D-NY), Ilhan Omar (D-MN), Rashida Tlaib (D-MI) and Ayanna Pressley (D-MA) — claimed on Tuesday that they were among the 34 individuals who had been arrested during a pro-abortion protest at the Supreme Court.

The group was reportedly removed from the street after they were repeatedly warned not to block traffic. In response to their refusal to follow orders, they were ticketed, fined $50 each and released.

After being briefly detained, Bush shared an image on Twitter of the group of progressive congresswomen standing with their fists raised near the still ongoing demonstration, which was organized in response to the high court’s overturning of Roe v. Wade.

“The Supreme Court will not stop us. Even though they arrested us, we won’t stop our organizing, agitating, and legislating for justice,” the Missouri Democrat tweeted. “We got us.”

The Supreme Court will not stop us. Even though they arrested us, we won’t stop our organizing, agitating, and legislating for justice.

Social media users immediately responded to her post, calling the congresswomen out for their attention-seeking antics.

“If anyone needed a group photo of the most ridiculous attention seekers in Congress, here you go,” @chicksontheright wrote.

“The cops who ‘arrested’ them had such a gentle touch that not a nail on their baby-soft hands was broken,” writer Douglas Ernst responded. “Modern politicians are almost always total losers. It’s embarrassing that Americans don’t clean house across the board.”

“Privilege is getting arrested and immediately getting to take an empowering selfie afterward,” radio host Joe Cunningham said.

“This is what it looks like when you’re part of the Establishment,” podcast host Gerry Callahan asserted. “No worries about being held without bail, imprisoned without formal charges, locked in solitary for a year, denied visits from your family. It sure pays to be dutiful friend of the Regime.”

Twitter user ‘AG Hamilton’ pushed back on Bush’s comments, responding: “‘They’ didn’t arrest you. The police cited you for blocking the street after giving you several warnings asking you to move. Then they walked you over to some grass where you took pictures to celebrate your publicity stunt. And you were doing that instead of legislating.”

“Supreme Court already overturned Roe v Wade,” Seattle-based radio host Jason Rantz noted. “You lost and all you have to show for it is an arrest record and an embarrassing photo.”

Critics also mocked Ocasio-Cortez for pretending to be handcuffed while a police officer escorted her out of the street during the protest. 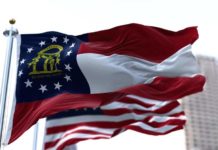