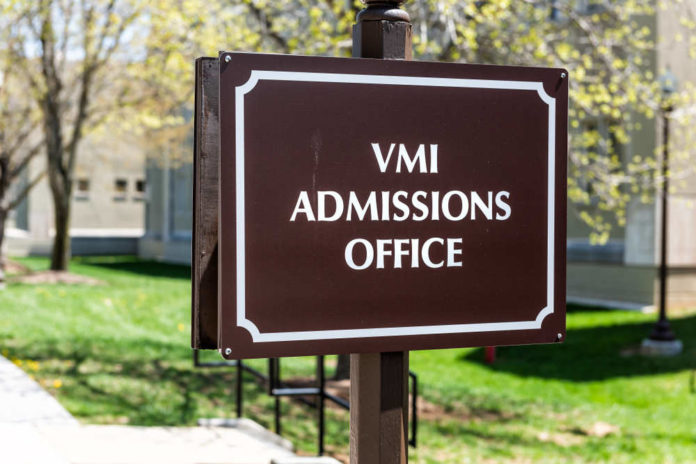 Once respected as among the nation’s premier military colleges, Virginia Military Institute has earned recent backlash over concerns that it is prioritizing a leftist ideology over traditional education.

Critics have identified the influence of Superintendent Cedrick Wins, who has overseen a shift in the school’s direction — and a 25% decline in enrollment.

Among the recent examples of a so-called “woke” curriculum at VMI was an address by author Kimberly Dark, who bills herself as a fat rights activist and argued that “America has been racist forever, sexist forever.”

Virginia Military Institute, the institution that gave us Patton, Marshall and Byrd, now asks about your "gender role", urges you to reimagine "masculinity" and spews hate toward anyone who happens to be white. https://t.co/aqprEjCqGb

The ongoing societal debate over diversity and gender norms is also a priority for the college’s administrators, as evidenced in a recent training session that asked students: “How have you benefited from adherence to your gender role?”

That course included resources such as a report denouncing the influence of “hegemonic masculinity” within the ranks of the military. For her part, Dark has vowed to help VMI recruits “reimagine masculinity.”

An overarching agenda is evident in the school’s Preston Library, which includes a Diversity, Equity, and Inclusion section that features works such as “White Fragility,” “White Guys on Campus,” and “The History of White People,” each of which provides sharp criticism of White Americans.

Although opponents of VMI’s ideological shift see it as a primary factor in the college’s declining enrollment rate, Wins has sought to blame the trend on external factors such as COVID-19 and a decreasing birth rate.

He has also lashed out at those who dare to criticize his leadership, asserting: “Misinformation regarding our initiative for diversity, equity, and inclusion and the thought, the notion, the misinformation about the institute and what it’s doing or what it’s not doing with critical race theory is certainly having an impact, we believe.”

Of course, VMI is hardly the only example of woke politics infiltrating higher education or the military.

Earlier this year, Fox News reported that Air Force recruits were required to attend inclusivity training that encouraged them to avoid using any terms that were associated with a particular gender.

Rep. Matt Waltz (R-FL) denounced the move in a statement declaring: “Now we’re instructing every cadet entering the Air Force to not say ‘mom’ and ‘dad,’ to not say ‘boyfriend’ or ‘girlfriend,’ and this kind of drive toward gender neutrality. I think the Air Force should be worried about the microaggressions against America that are happening all over the world.”